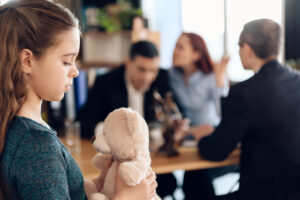 Child custody is one of the most important (and contentious) issues that our family law attorneys focus on. Child custody and visitation issues arising out of a separation or divorce can be determined in one of two ways: (1) parents can resolve these matters without court intervention by executing a parenting agreement or consent order; or (2) a judge can determine how custody and visitation should be awarded after holding a hearing to determine the best interest of the minor child.

Ideally, child custody matters should be resolved between the parents and without the need for judicial intervention. After all, the judge will never be able to know your child and family dynamic as well as you do.

In these cases, an agreement on child custody and visitation between parents can be formalized by a properly executed parenting agreement or a consent order signed by a judge. A consent order is typically a better vehicle for agreements dealing with child custody matters because North Carolina custody laws provide a clear framework for enforcing and modifying consent custody orders.

The family law attorneys at Younce, Vtipil, Baznik & Banks in Raleigh, N.C., can help you work out arrangements with your estranged spouse (or the other parent) for your child’s future. We negotiate agreements according to our clients’ needs and desires and in conformity with child custody laws in North Carolina. This creates a healthier environment for you, your co-parent, and your child.

In these cases, our role is to protect your rights as we work with you to develop a strategy to obtain the custody arrangement you believe is best for your children.

What Is Child Custody and Visitation in North Carolina? 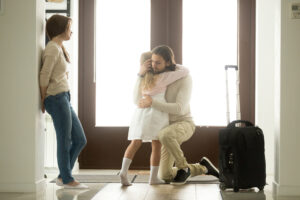 ‘Best Interests of the Child’ in North Carolina

In the absence of a child custody agreement, North Carolina law requires the presiding judge to decide child custody matters according to “the best interests of the child.” A judge has wide discretion.

The judge’s decision may be based on many factors, such as:

In some cases, the grandparents may seek custody of their minor grandchildren. To be successful, the grandparents seeking custody would have to establish that both parents have waived their exclusive right to the care, custody, and control of the minor child by neglect or parental unfitness.

Filing for Custody in North Carolina

If separating or divorcing parents cannot come to an agreement about child custody and visitation arrangements, either parent may file a complaint seeking custody of their minor child.

Before a custody hearing goes to court, NC courts require the parents to attend custody mediation. A neutral third-party mediator who works for the court system will meet with both parents and try to craft an agreement to avoid the need for a trial. Mediation includes an orientation class and at least one mediation session of up to two hours. Additional sessions may be scheduled as progress toward an agreement warrants. 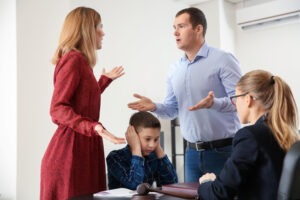 If you and your spouse cannot agree to a custody and visitation plan in mediation, a judge will hear your case in court.

A child custody hearing is based on factual evidence presented to the court. Hearings usually require the presentation of witnesses and exhibits. If you were to represent yourself in court, you would be held to the same rules of evidence and procedure as a licensed attorney. You’ll be at a disadvantage representing yourself. With the representation of a child custody lawyer at Younce, Vtipil, Baznik & Banks, you will be protected and prepared for the hearing.

As we work together to prepare for a child custody hearing, it is important that you provide your child custody attorney with as much factual information as possible that can be verified by objective evidence. This may include documents related to your child’s school attendance and performance and suggestions for witnesses who can testify to your relationship and involvement with your children. It is more important that the evidence be focused on your positive attributes rather than on attacking the other parent. The more we can move beyond a case based on “he said/she said” the better.

A judge will not initially favor one parent over the other. A judge will only make a decision after hearing from and observing both parents in court. We will work with you to gather evidence and prepare testimony to show the court that you have your children’s best interests at heart.

In North Carolina, both parents have equal rights to the care, custody, and control of their minor children unless circumstances such as abuse, neglect, or inability to provide a stable home exist. The child custody lawyers of Younce, Vtipil, Baznik & Banks, P.A., can protect your rights. Our attorneys will make sure your goals and desires are integral to your negotiated child custody agreement or your presentation of evidence to the judge who will determine what is in the best interests of your child.

The attorneys of Younce, Vtipil, Baznik & Banks have the knowledge and experience needed to help you seek the outcome you desire for yourself and your children in a child custody case. We also represent grandparents in certain cases where they may have the right to seek custody or visitation of their grandchildren. To schedule a confidential consultation, call us at 919-661-9000 or reach out online.